MLM Binary plan is a plan structure which is used in Multi Level Marketing, that is very simple and popular among MLM Plans.
In this plan, each joiner/member is positioned in the binary tree structure.
The right sub-tree and left sub-tree concept is the members downline connections. Each member will have both trees.
This plan is being very popular because of its simplicity.
Started in late 1980, binary plan has become one of the most popular plan in the MLM industry by 21st century. 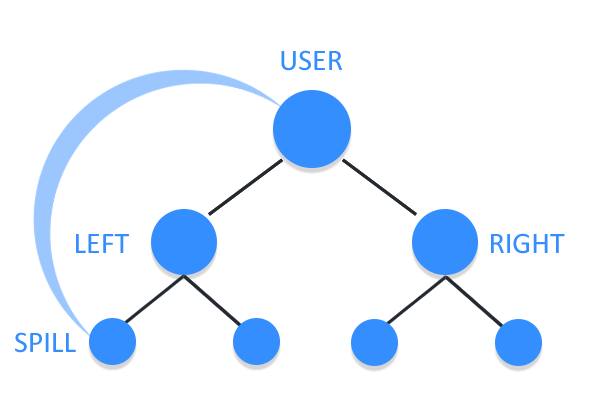 Each user in binary plan will have two down-line. known in various names.

This down-line can be called as any of the three above.

Binary plan's special feature is that a member only have to recruit two members, although not limited to. And encourage them to recruit members under their legs.

This can result in a rapid growth in network with large number of organization members in a short period of time. Saying  that it is not that a member can only recruit two members but can recruit/sponsor more than two. And if they do the recruited member will be added to the available node in power leg , this is called as spill over.Which means the profit from this persons will be shared with all ancestors in the power leg.
Spillover will help the organization members to act as team with shared benefits from adding more members.

Every Binary plan structure will have two branches , The Left & Right.

Whichever of this branch makes more money, that is the profit leg.

Whether it right or left, the leg with less members will be the profit leg. Profit leg will not grow beyond power leg.

When the power leg and profit leg reaches the same depth, maximum profit will be available. So the profit is increased when there are new joiners in the system.  Each member should concentrate on profit leg, that  means, there is no determining profit leg and power leg by its position. Whenever there is a new joiner in the profit leg, ancestors of  the joiner will be awarded with the benefits.

In Cloud MLM Software , admin can configure all the values from software administration area.

And also admin can limit the binary commission per users in every month or week or year from the administration area by setting a binary limit and binary limit duration.

By introducing a new member to this network, each user will be able to achieve the sponsor commission.

In cloud MLM Software The amount for sponsor commission can be defined from the administration area.

The term 'Rank' refers to the relative position of a member in the network. By default, each member holds basic rank.

The rank upgradation is depending upon the number of referrals the user personally did, and the total number of members which has specific rank under the user in the binary tree.

Cloud MLM Software is capable of managing all those settings i.e:the rank can be managed from the admin side rank settings. Also it can be completely  reconstructible as per your own custom plan.

Have a question? Confused about choosing?

Our experts are ready for instant chat via WhatsApp!

Have a Question about MLM Software / Another Work?

Our experts are ready for instant chat via WhatsApp!

Need a website, WordPress/Drupal/Laravel/Opencart ? Or Need another custom software? We do it faster and assures quailty delivery.

Help us build a better web!